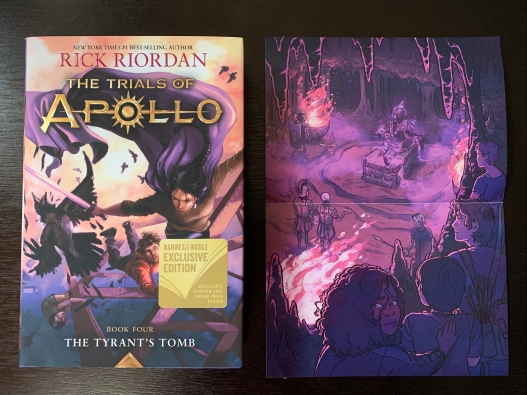 In his penultimate adventure, a devastated but determined Apollo travels to Camp Jupiter, where he must learn what it is to be a hero, or die trying.

It’s not easy being Apollo, especially when you’ve been turned into a human and banished from Olympus. On his path to restoring five ancient oracles and reclaiming his godly powers, Apollo (aka Lester Papadopoulos) has faced both triumphs and tragedies. Now his journey takes him to Camp Jupiter in the San Francisco Bay Area, where the Roman demigods are preparing for a desperate last stand against the evil Triumvirate of Roman emperors. Hazel, Reyna, Frank, Tyson, Ella, and many other old friends will need Apollo’s aid to survive the onslaught. Unfortunately, the answer to their salvation lies in the forgotten tomb of a Roman ruler . . . someone even worse than the emperors Apollo has already faced.

Before I begin my review of The Tyrant’s Tomb, I want to make it clear that many of the aspects I enjoyed about this novel are also true for the previous three novels in the series. I really liked the Percy Jackson series when I had read it two years ago. However, The Trials of Apollo brings it to a whole new level. Imagine my love for Percy Jackson, but multiply it by five. That is how much I love this series!

Fourth book. Fourth trial for Apollo. We all know the seriousness regarding their journey to restore the five ancient oracles. However, Apollo as a character makes their situation laughable. He is so funny! The comical element of the series brings it to a whole new level.

Above, we talked about Apollo and why he comes across as such a loveable character. In this part, we are going to talk about the journey Apollo takes during this story. No, we are not talking about a physical journey here. The journey I am referring to is the process Apollo goes through to understand how previous behaviors of his come across as selfish and harsh. His history with Koronis, the mother of his well-known son Asclepius. His history with Harpocrates, the god of silence. His history with the oracle of Cumae. He regrets his behaviors and comes to an understanding that he needs to have a more compassionate mindset.

Each chapter begins with a haiku. They act as a chapter preview. They are so funny! Here are a few examples

Sailing north to war / With my Shirley Temple and / Three cherries. Fear me.

We have a special / Today on slightly used trucks. / Thanks, Target shoppers

It goes without saying that I love this book. I love all four books in the series so far. I can’t wait for The Tower of Nero to be released in September 2020. Have you read The Tyrant’s Tomb yet? What did you think about it?